INITIAL CAPITAL BASE- The Power of Recognition 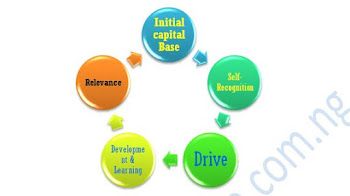 In accounting terms, initial investment is known as the capital base which is usually used to start up a business which will eventually generates some profits for both the investor and the manager of the business and this profits can also be added to the initial capital base in order to expand the business.

No matter how wretched or wealthy any human might seem to be on planet ‘Earth’, God has the richest investment on him; an inexhaustive infilling of His spirit in form potentials. Note that the only difference between a successful person and a seemingly unsuccessful person is the power of recognition; Eagle’s eye. Many people persistently chase luxury in place of necessities; needs ought to be in hierarchy. Note that if you purchase a gold wristwatch and you cannot effectively feed yourself anymore after the purchase of the item, you will be compelled to dispose of it in order to cater for your buccal cavity; physiological needs. Let’s take for instance, no matter how rough a gold might be, the miners recognize it, even to the extent that when they approaching it during the process of mining, they know, because they are familiar with the likely signs. But a novice on the other hand, he might pick it up as a stone and throw it at a dog that might have been disturbing him or even exchange it with another person for a stone.

God usually makes an unquantifiable investment (Deposits) into every individual lives and this is usually done at the tender age of every child so that it can become glaring as they are growing old. Youthful age is the age at which adequate strength is available to pursue any goal and realize it. When man fail to understand or recognize the invaluable investment that (God) has been on him, he will joyfully squander it. Note that wretchedness emanates when there is no self-recognition and it abounds when it meets with laziness. A person that fails to recognize himself usually operates like a square peg in a round hole. Note that anything you do not observe can never lead you to experimentation. Experimentation is a keen interest directed towards an understanding of a particular phenomenon through a purposeful search and research known as vivid and thorough examination.

If the infilling of God (Anointing, talents, potentials e.t.c.) happens to be God’s richest investment on mankind, then a lazy person can never profit from such because it takes zeal which is reflected in one’s hard work to expand such an investment. Note that an investment that fails to generate profit will shortly wind up. Do you really know that initial investment is like a rhizoid on a decompose carbohydrate food in which the permission of a single release of the spores (trading) will result into an uncontrollable repro-creation of rhizoid (profits) on the same food and this usually makes the decomposition process very easier and faster. Pursue that which you have passion for as that might be your initial capital base but ensure that it is not for the purpose of self-glory. We can as well ensnare men (keep men coming or longing for more) through our initial capital base by venturing into some related line of products or conglomerations provided that they are channeled towards the same goals.

For instance, Dangote PLC (in Nig.) could keep expanding his business because of his zeal to profit from the little capital base (business ideas) which is reflected in his hard work which also led him to the exploitation and production of some products needed to satisfy human needs such that most of the things needed by the households and others can be purchased from him and this has led to the expansion of his trading skills and talents. But a lazy person will be so much complacent with the initial investment without sharpening it, and never aspire to move to a greater level. They even watch till the initial investment becomes irrelevant. Note that if a person is endowed with the ability to prophesy, and the person remains complacent with the enablement, he can never last long because the era of prophesy is never eternal except he makes effort to long for other enablement- related diversification such as intercession, prayer e.t.c. God usually loves to invest in the youth because youthful age is the time of strength in which they can adequately explore and exploit His original investment in them but any mistake made in the youthful age are usually very difficult, if not impossible, to be corrected at the adulthood. Note that any choice made by parents for their children at their childhood are usually not permanent as they are subject to change based on the child’s discretion at his youthful age. 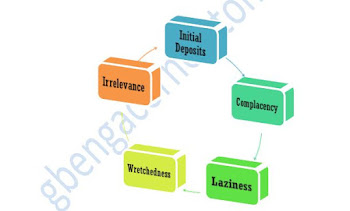 A lazy person is as bad as someone who destroys things or a brother to him that is a great waster. A lazy person cannot be made a master of something precious or capable of becoming great because keeping those things in their custody will amount to total destruction. Laziness is capable of rendering a precious material irrelevant because of the nonchalant attitude of the bearer; laziness is a road leading to the destruction or extinction of a flaming enablement. Note that one’s greatness and relevance lies in the continuous exploitation and utilization of the initial capital base (anointing, talents, potentials, grace e.t.c.) which must be continually multiplied (increase in talents) in such a way that it can be tailored to man’s needs (one cannot be relevant eternally except for the continuous development of one’s potentials to meet up with constant changes).

The fact that many people cannot foresee their destined points usually makes them slothful but the truth is that our early recognition of the initial capital base (investments, talents, potentials) is capable of giving us a glimpse of what we might end up becoming, if and only if, we properly appropriate our effort in utilizing it to profit the more.

Stop saying that there is nothing you can do because there are always something you can do. Many people that lack self-recognition usually live a shadow of themselves, although they might be wealthy but they might not be fulfilled. Even if you are naturally endowed, never remain complacent to learning; management is not only an art (natural endowment) but also a science (entails learning process), but you can progress to a level called Scientific Art.

← Previous Story THE PARENTLESS CHILDREN
Next Story → Learning: the pathway to knowledge