Self importance can be likened to a situation where by an individual paints the picture of what he/she has never been in the mind of people in an unruly manner, giving oneself an undue reverence or exalting oneself when such is not expected (I.e. when one’s words and behavior is over flooded with one’s praises or overestimated self). It can also be regarded as recognizing oneself as a person that possesses an unchallengeable, uncommon, un-phatomable, and unparalleled virtues and thereby making one’s heart to be inflated. This might not be totally true because what one is carrying cannot just be regarded as an undisputable virtue until it is tested in fire and it is able to stand the test of fire.

If your belief is that there is virtually no one that can perform far better than you do, then, I would regard you as a person that knows nothing/a nonentity. Always bear at the back of your mind that before a footballer could leave the pitch, another player would have been getting ready to assume that position (i.e. there are many people outside there, preparing day and night, waiting to see the day of their manifestation. Any slight mistake by you gives them access to take charge of your position). Many people earnestly and hopefully wait for your error that they may also capitalize on that to succinctly showcase their talents and attract your audiences’ attention. Note that when your value increase, your noise is meant to reduce; your sacrifice is not meant to be made everywhere.

This simply signifies that before one’s time expires, God would have nurtured another person that will assume one’s position without any trace that one is no more there because He can never leave His work undone. 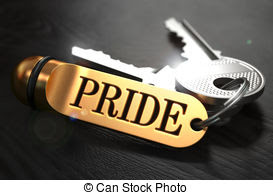 This is a product of self importance. This is usually a limiting factor to everyone that has this virtue because it hinders them from monumental opportunities. Pomposity has reduced many people to nothing even in the sight of those that can/want to assist them; people often times blame themselves for the fact that they conceived the idea of assisting such a person. Every organization at every point in time loves to hire anyone that they can give command to and will perfectly execute the assignment with little or no assistance but an individual that is fond of himself/herself will find it very difficult to work and walk peaceably with the person giving the order because of his/her inflated heart. He/she will never want to take order from someone that he sees that he is above him in all ramifications: age, qualification, zeal to work, e.t.c. yet he receives orders from him/her. Believe me, it might just be a test; if you are not tested in the valley, it might be difficult to trust you on the mountain. Patience is the only way out to understand the will of God in such situation.

Pomposity takes away the pride, honour/respect, dignity and unquenchable fire of love that people have towards one and envelope one’s life with shame, dishonor, and finally make one an “outcast.” Never think too high of yourself because any man that thinketh too high of him falleth at last. Do not overrate yourself because that might make you get yourself involved in things that ought not to be of any concern to you and this might results into unprecedented negative results.

Remember that you are also a mortal being from whom life can be taken any time. Never attempt to inflate yourself because you long for people’s attention and acceptance, it might boomerang, and the resultant effect is usually ‘hatred.’ Do not permit this to form the bulk of your personality.

Never live your life to please human because that is only a mirage but rather live to please your creator. If all your effort each day is channeled towards pleasing human, then, you have done nothing but succeeded in wasting your time. The reason for this being that human needs are insatiable- once one is satisfied another one emerges. The more you satisfy human the more their expectation over you increases. Living one’s life to please men of one’s kind might cost one his honour- one might end up being displaced from the place of his honour. Remember that managers do things rightly while leaders constantly make effort to do the right things

Many people’s relevance disappears gradually or they suffer from relevance downturn (cage away from being seen) in the society today because they give undue reverences to themselves, although, they are loaded with virtues. Whenever they are invited to any event, they get there late even when they have the privilege of getting there early and this is simply because they want people to start hailing them as they are entering. Note that getting late to a particular event in which you are invited to without prior notification to the person that had invited you that you were going to come late shows that you are not a man of integrity.